Part 2 of our camping theme centered around hiking and fishing. I have to say this was one of our most enjoyable weeks of preschool!

Here is our book list.  The book We’re Going on a Bear Hunt

is an old favorite of ours, so it was a perfect candidate for us to center activities around. First, we made binoculars to take along on our bear hunt. I used two used toilet paper rolls and had Curly decorate them. 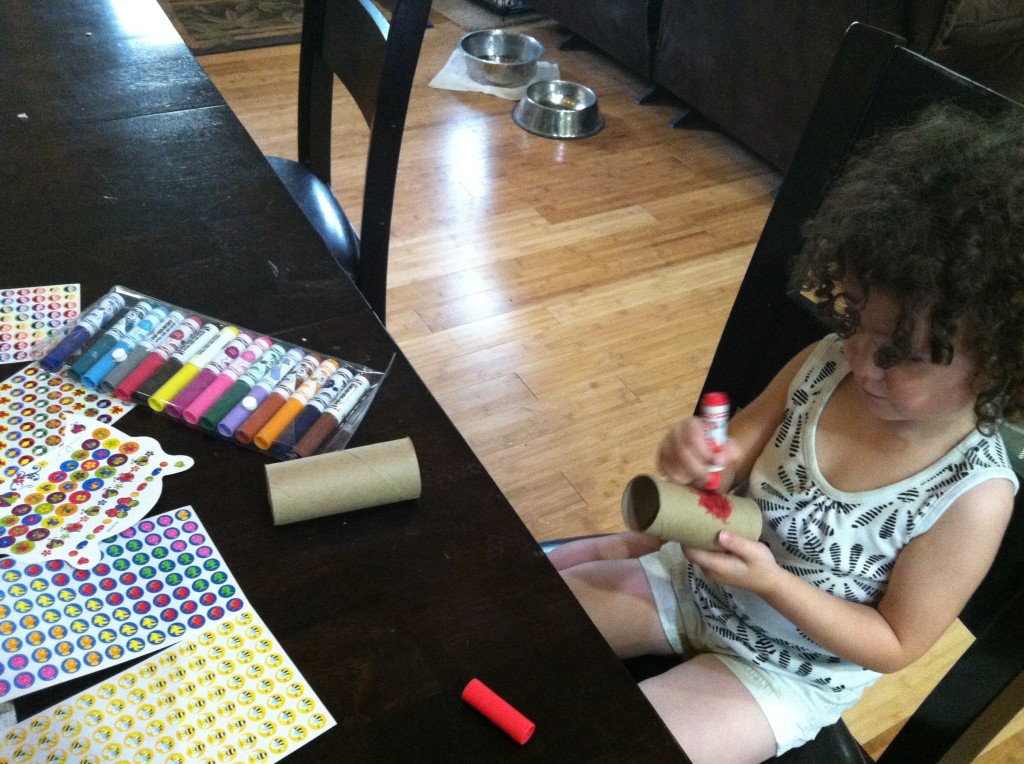 I provided markers and a variety of stickers.

Then we glued them together. It may have been easier to staple them together, but I couldn’t find the stapler. In any case, white school glue worked just fine. Then I used a hole punch to punch holes large enough for yarn to fit through, and we had a pair of binoculars.

Next we made a ‘bear hunt snack’. I showed Curly how to make trail mix. We used cashews, raisins, and chocolate chips. We were now ready for our bear hunt! 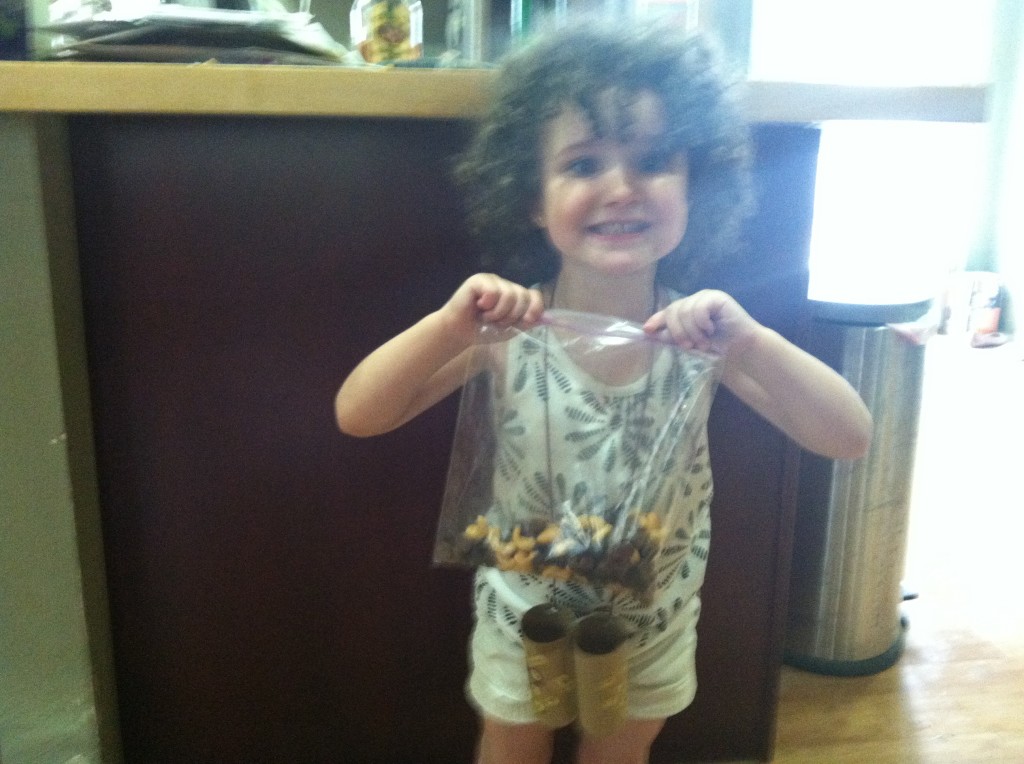 Curly is very excited about the trail mix in this picture. Her finished binoculars are around her neck. Sorry about the poor picture quality…someday I will get a real camera instead of always using my phone.

We headed out into the yard and pretty much just ran around pretending to go through tall grass, wade through a river, get through mucky mud, etc, all while quoting the book. We finally made it to the ‘bear cave’ , which was simply her fort made of sticks we made a couple weeks ago. We then ran like mad back through our make-believe obstacle course of mud and rivers, to finally make it back to our house and jump under blankets on the couch. By this time she was giggling like mad, and I have to admit I quite enjoyed myself. Now Curly asks to go on a bear hunt almost every day.

We did a fish craft that I’ve seen suggested many times. You have your child paint bubble wrap and stamp paper to create the effect of fish scales. It worked pretty well! 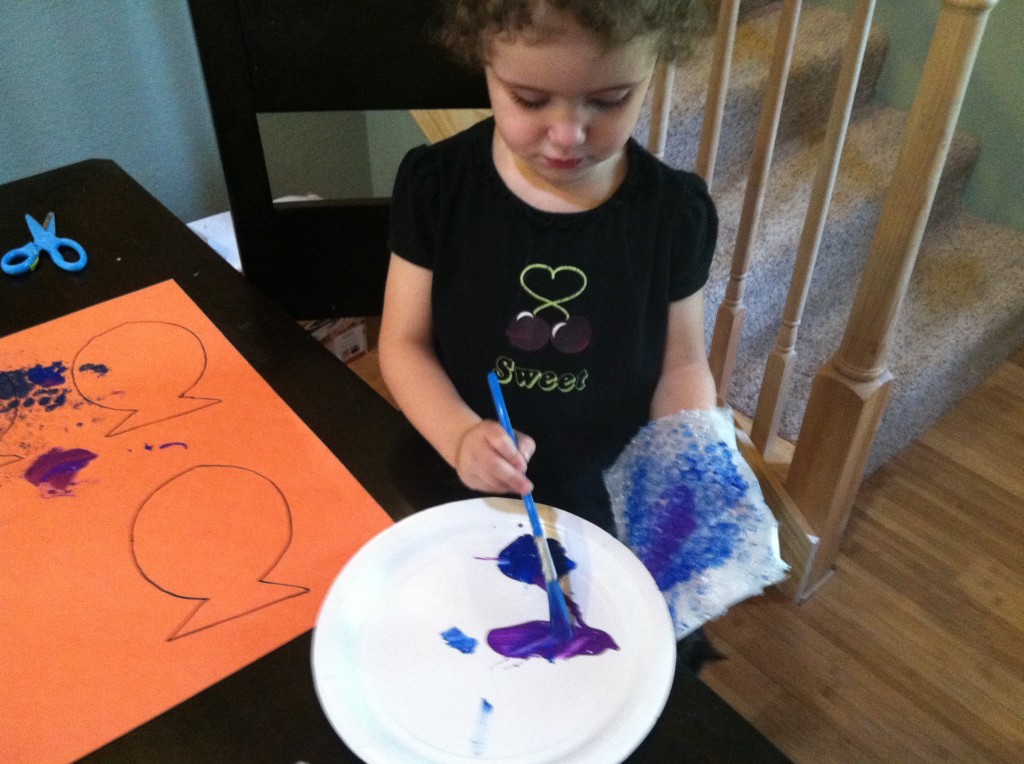 I taped the bubble wrap around her hand to make it easier to work with. 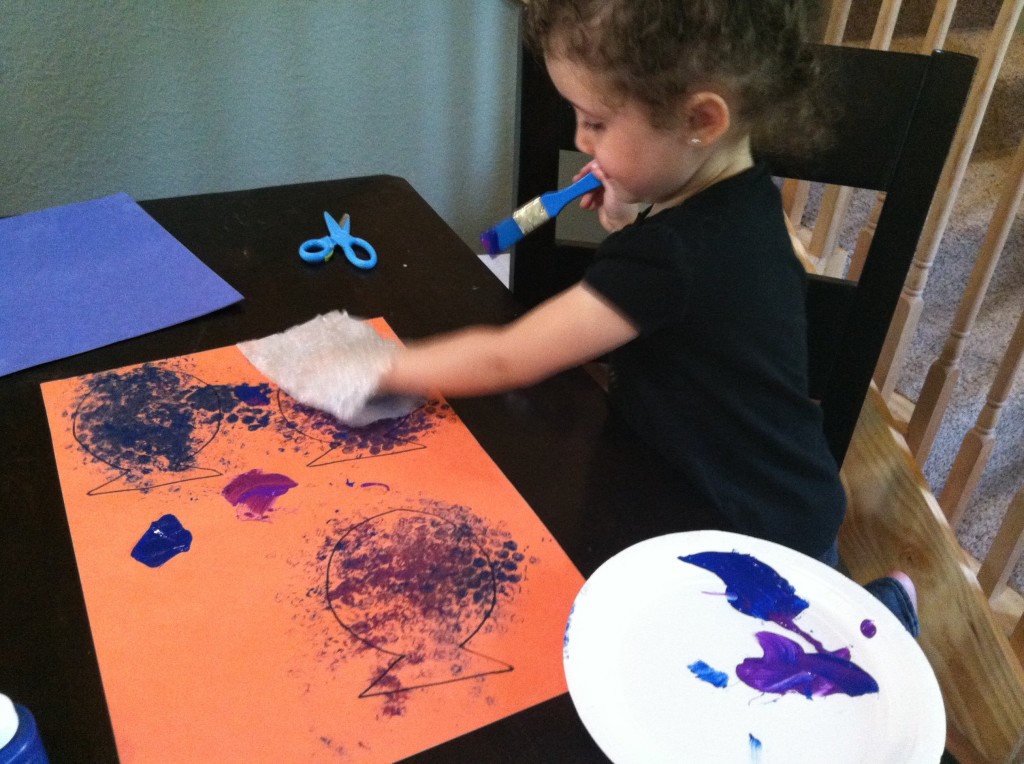 She really enjoyed the stamping part! I had already traced fish shapes onto the paper to make it easy to cut out.

I did most of the cutting out of the fish, although she did do a little herself. Then she glued the fish onto some blue construction paper. 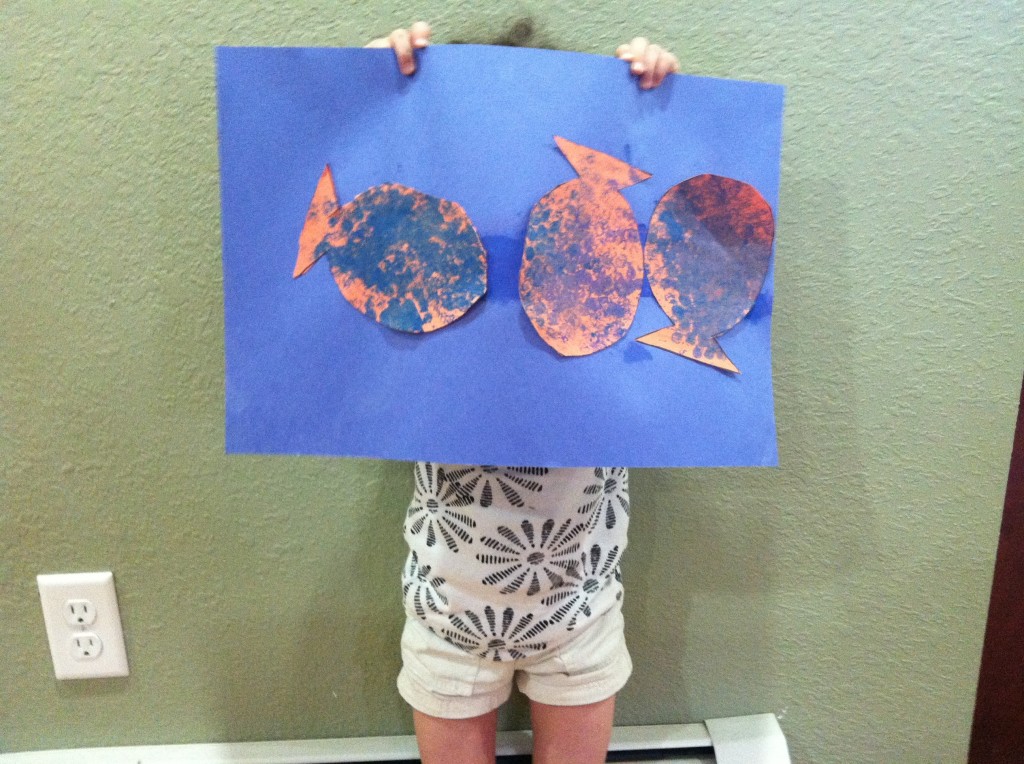 For a fish snack I made blue jello (for the first time EVER; we never have jello) with gummy worms in it. Lo and behold, my child thinks jello is disgusting. I had to feed it all the husband, who gleefully devoured it. At least it didn’t go to waste!

We did another fish snack that was much more of a hit. All you do is have your child dip pretzel sticks in peanut butter, and then use the sticky pretzel stick to pick up fish crackers. Fishing with crackers! I really wanted to take her on a real fishing trip, but we didn’t have any time to even plan it. We settled on eating fish snacks and reading books about fishing instead.

I grew up in a place where we went fishing almost every day near our house, all summer long, so I have really nostalgic feelings about fishing. I hope she can experience some of the same childhood that I did! 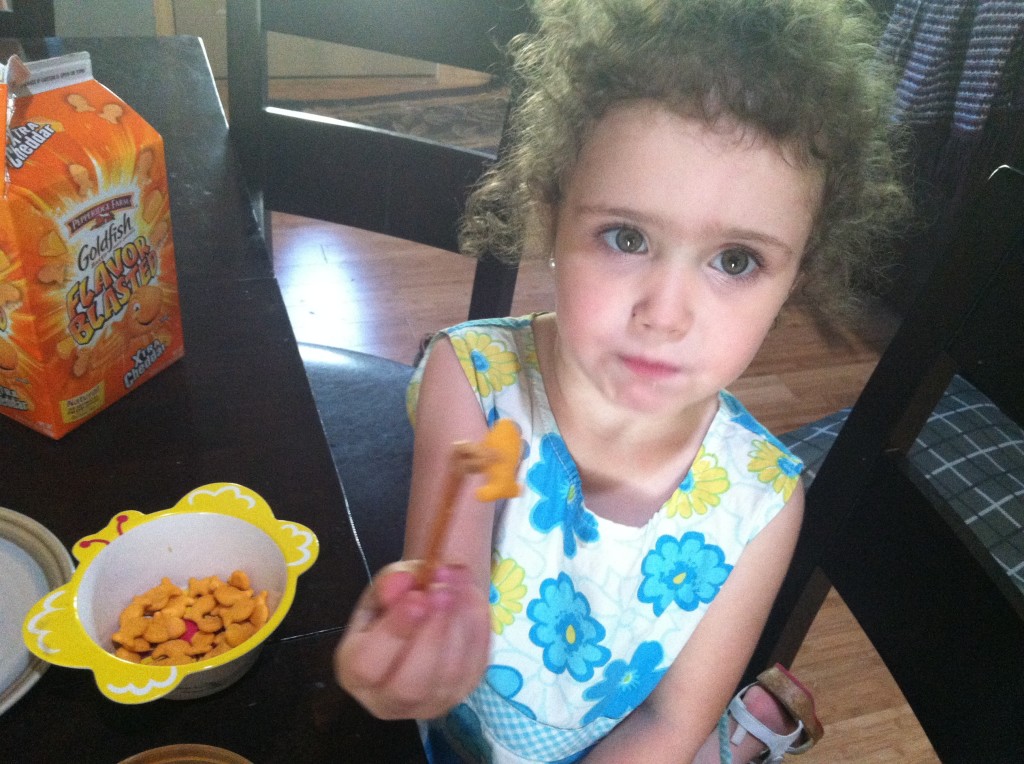 For a math activity I used a bunch of plastic cups we had on hand and wrote numbers on them. Then I had her count out marbles into each cup. I will be saving the cups for many other math activities. 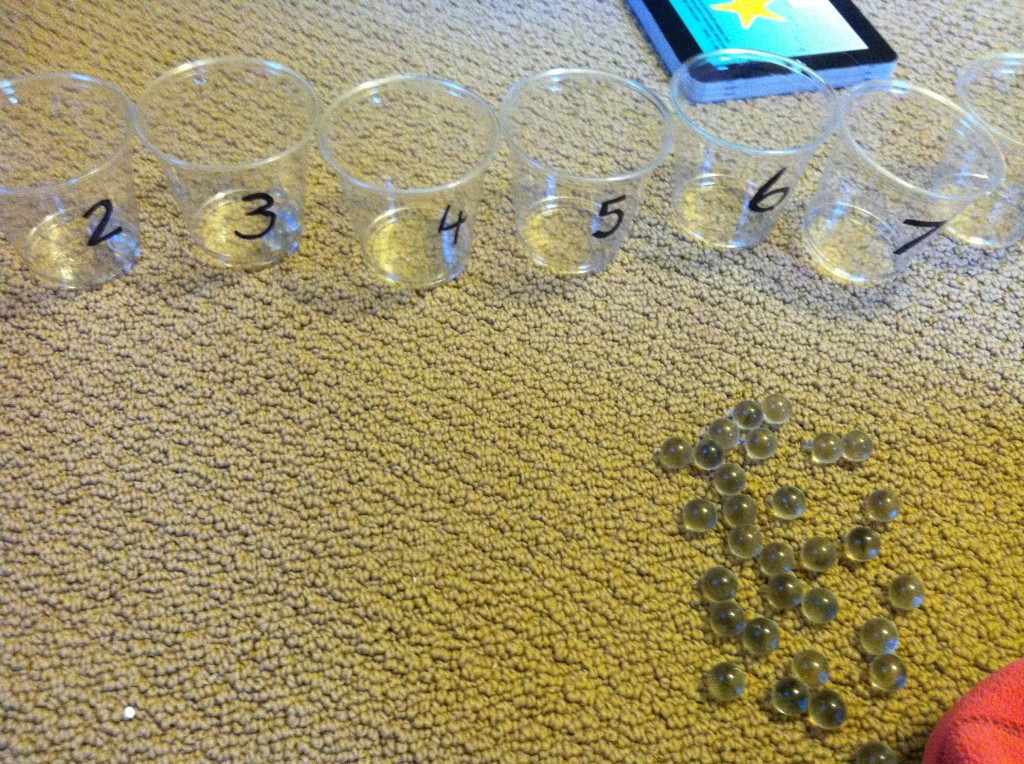 This time of year the prairie is just bright with wildflowers, so I took Curly out to cut some with me to put on the kitchen table. We found mostly daisies and wild sunflowers. 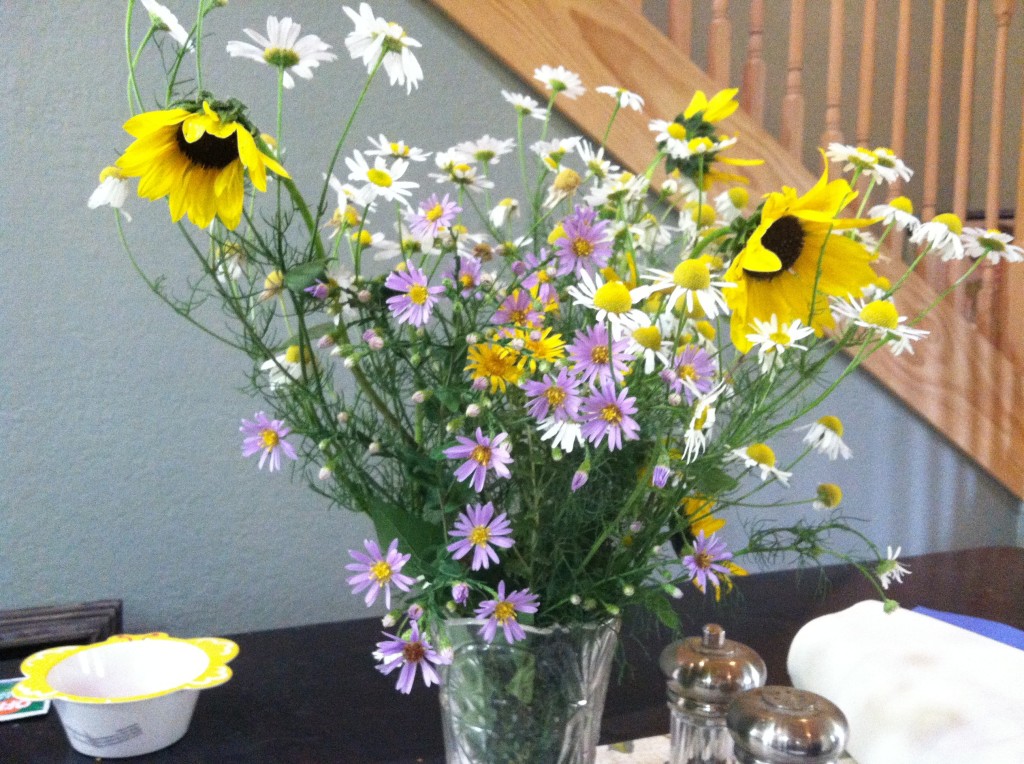 We had a great week!

Here are some books about camping, hiking, fire safety, and fishing!

Here’s a few more that I had on a list but didn’t find myself:
A Camping Spree With Mr. Magee by Chris Van Heusen
S is for S’mores by Helen Foster James
Boris Goes Camping by Carrie Weston
Stanley Goes Fishing by Craig Frazier
Wishing I Was Fishing by Eva Wells
When Peter Was Lost in The Forest by Hans Peterson
Happy camping!

We’ve been doing camping activities for a couple of weeks. We were supposed to go to Glacier National Park on a camping trip this year, but our plans didn’t work out. So, we’ve been having fun at home instead.

We did a craft involving straw painting, where you blow paint across the paper using a straw. I provided yellow, orange, and red paint and showed Curly how to drop it onto the paper using the straw. Then I showed her how to use the straw. I had mixed the paint to be pretty runny so it wasn’t too hard for her to blow around. Next, I had her paint some popsicle sticks brown and set those aside to dry. 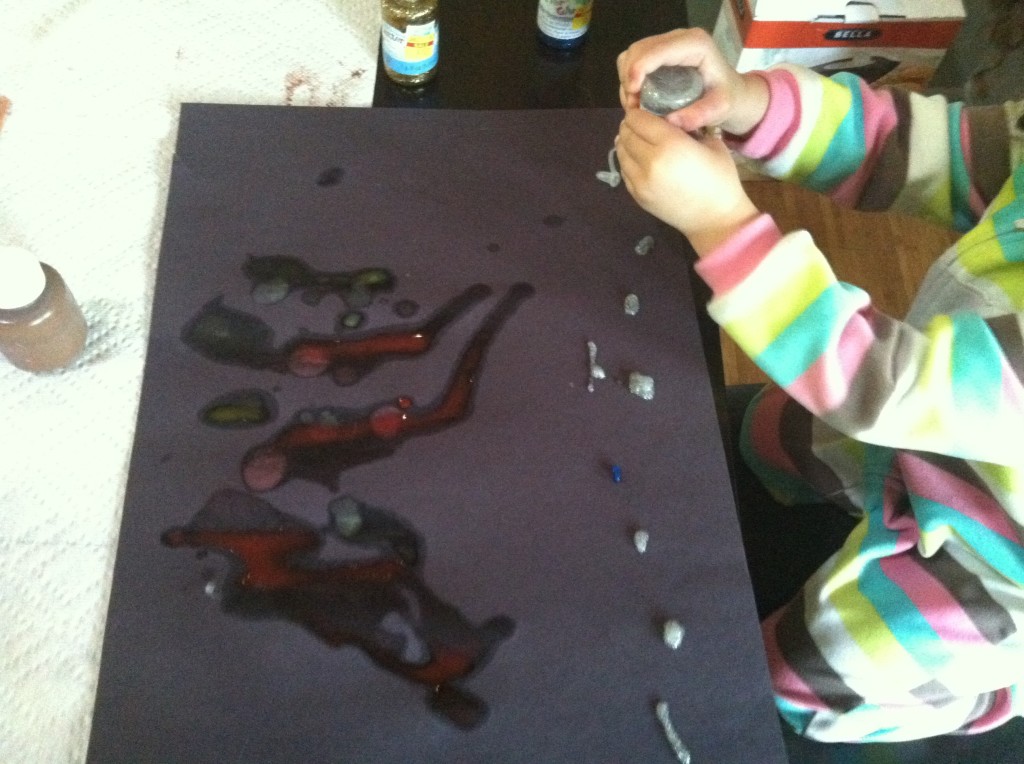 Then it was time to add stars – we used glitter glue in squeeze bottles. I had silver, blue, and gold.

Once she was done adding the stars, I helped her glue the popsicle sticks underneath the ‘flames’ and ta-da! A campfire craft. 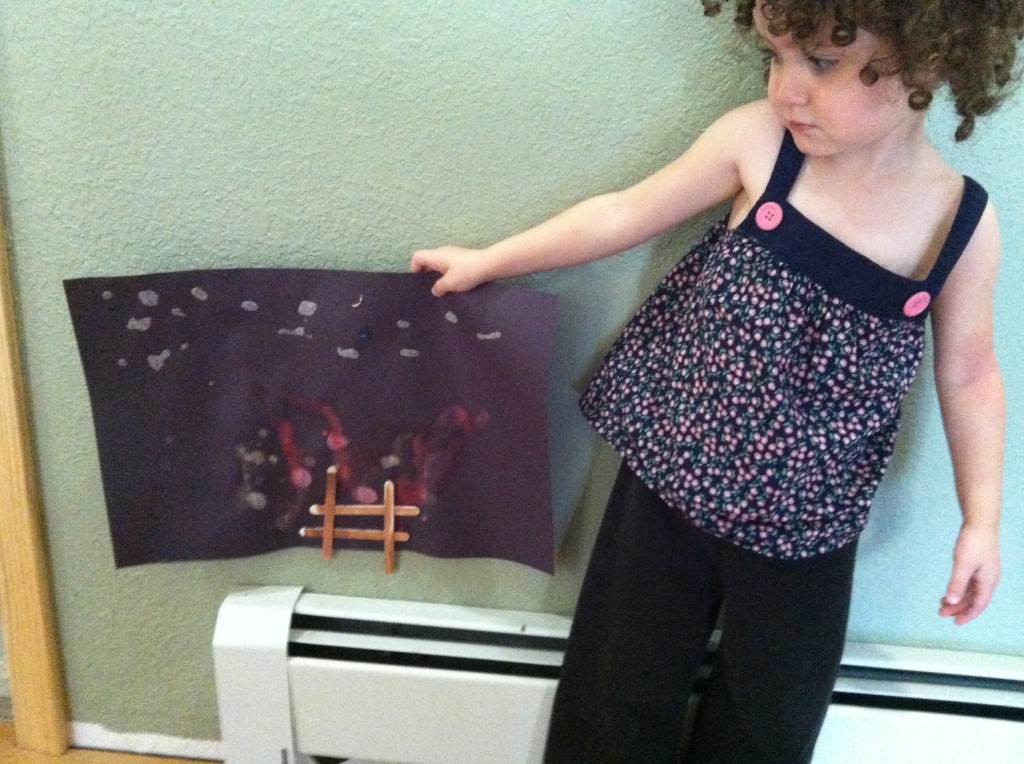 Curly was very proud of her starry-night campfire.

We did an unrelated art project too. Curly wanted to glue something, so we did an impromptu mosaic. 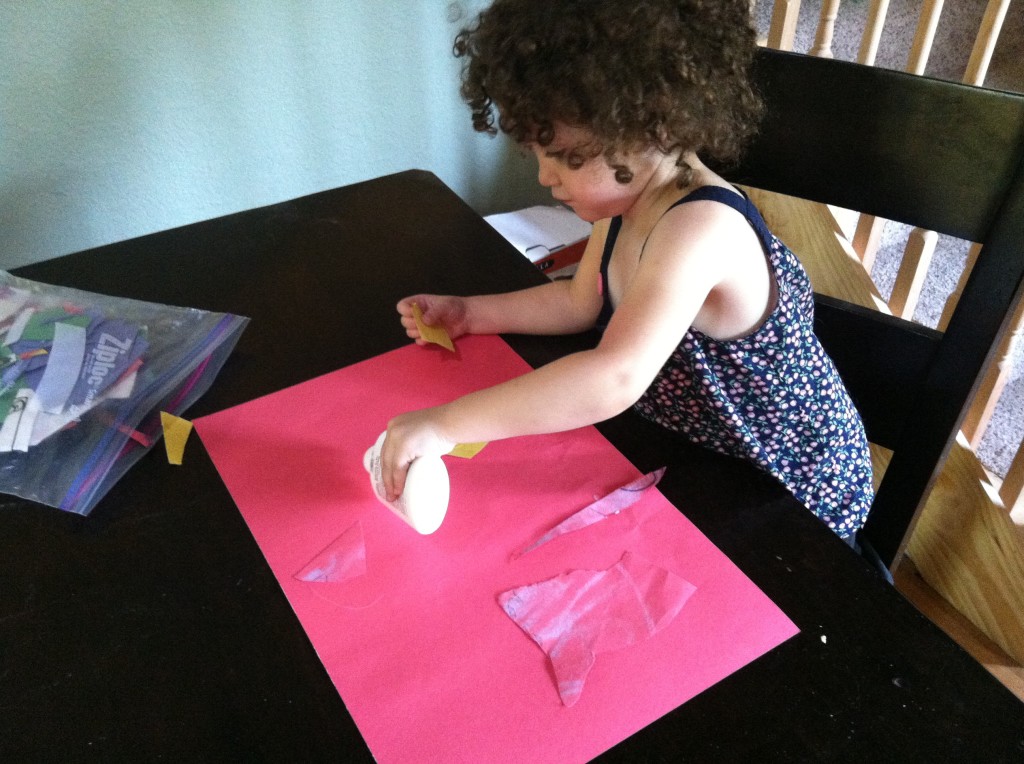 Here she is putting glue down and placing random paper pieces she’s cut up. 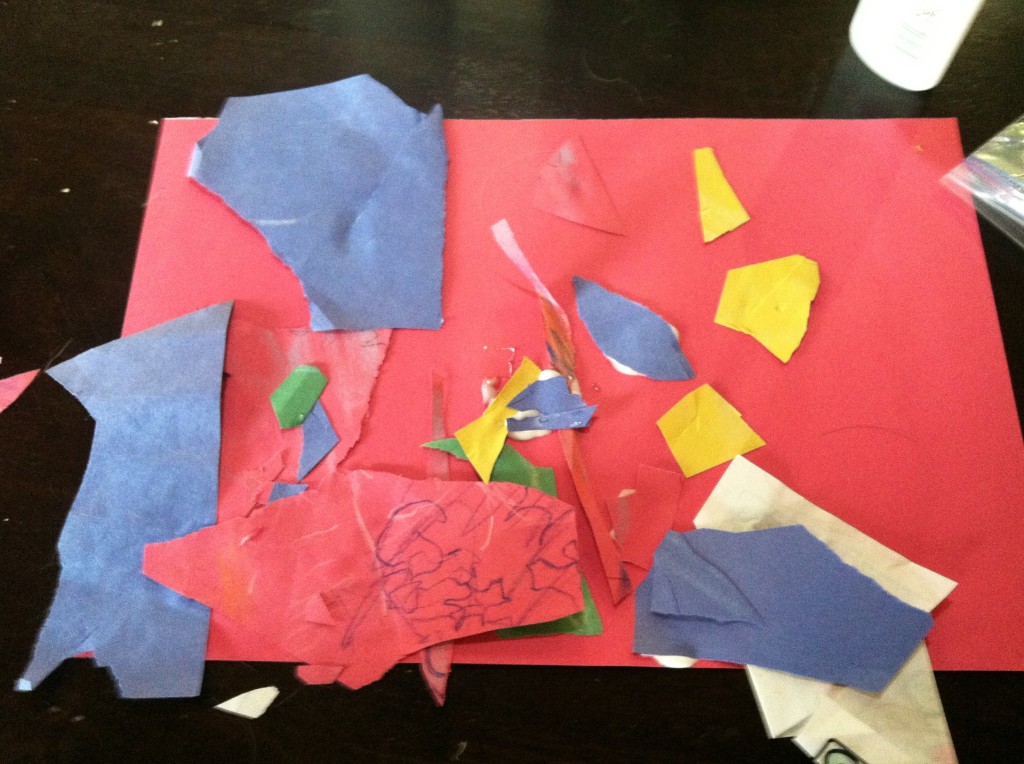 The finished mosaic. She chose what color background she wanted to use and she chose all the paper scraps.

We talked a lot about fire safety this week. We learned the Stop, Drop, and Roll, which we practiced. I would bring it up randomly throughout the week. Unsurprisingly, Curly found it super fun to suddenly drop to the floor and roll around. What kid wouldn’t?

You can’t have camping week without singing campfire songs. Twinkle, Twinkle, Little Star is the favorite around here.

We had to have some pretend play. My plan was to have a fire in the backyard, but it’s been so warm here that no one wanted to. Can’t say I blame them! So we just built a fort and made a pile of sticks that was the ‘fire’. 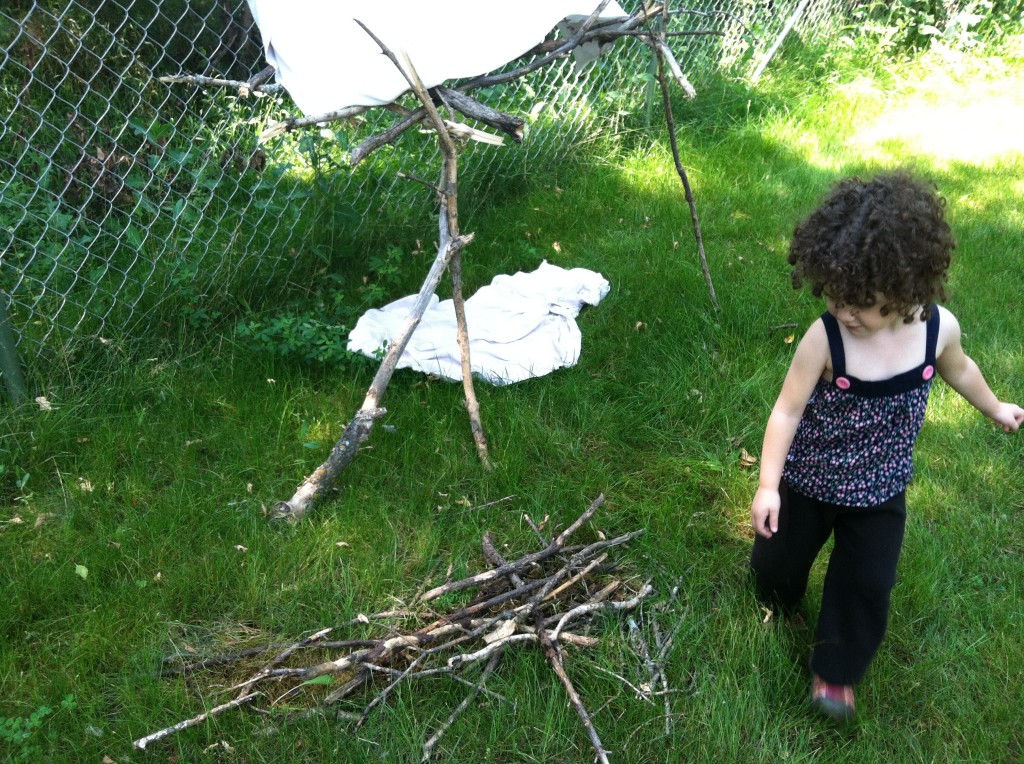 For science we did the next experiment in our science set

. We soaked pennies in different liquids to see which liquid would clean pennies better. Lemon juice won out. We talked about how lemon juice has acid in it, and how acids will eat away at things, like grime on pennies. 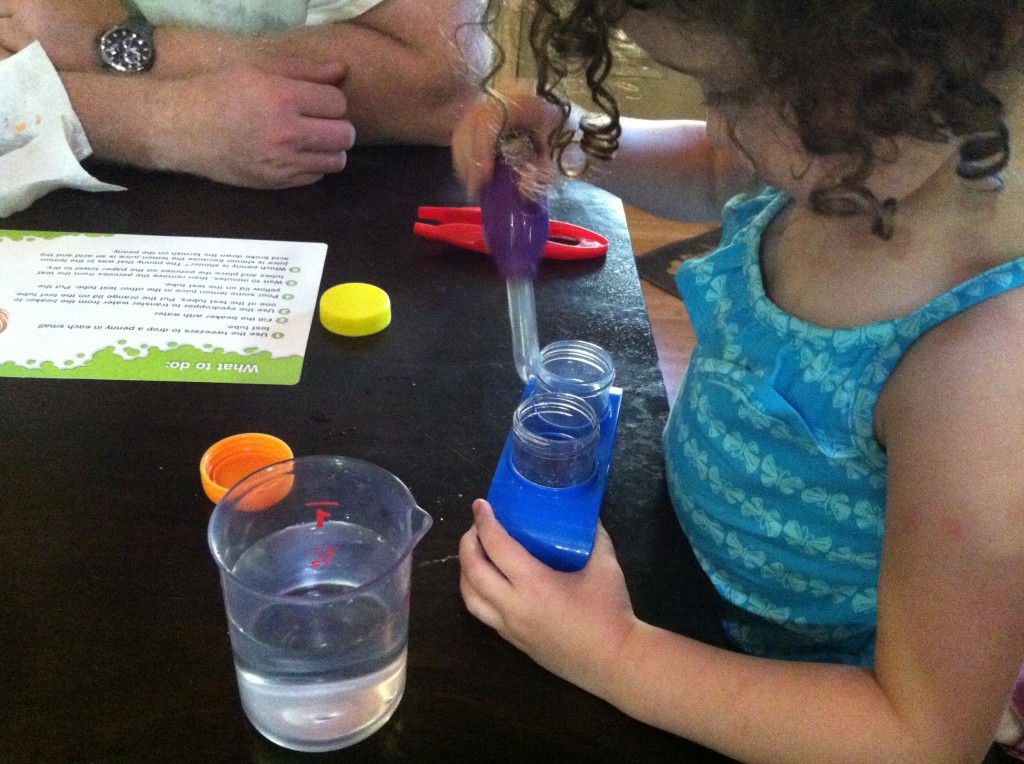 We also spent some time vising family in Minnesota , and we went out to pick blueberries, something that Curly has been begging to do ever since we read Blueberries for Sal. She acted a lot like Sal – she plopped down in a patch and ate all she could. The ones that ended up in her pail didn’t stay there long! 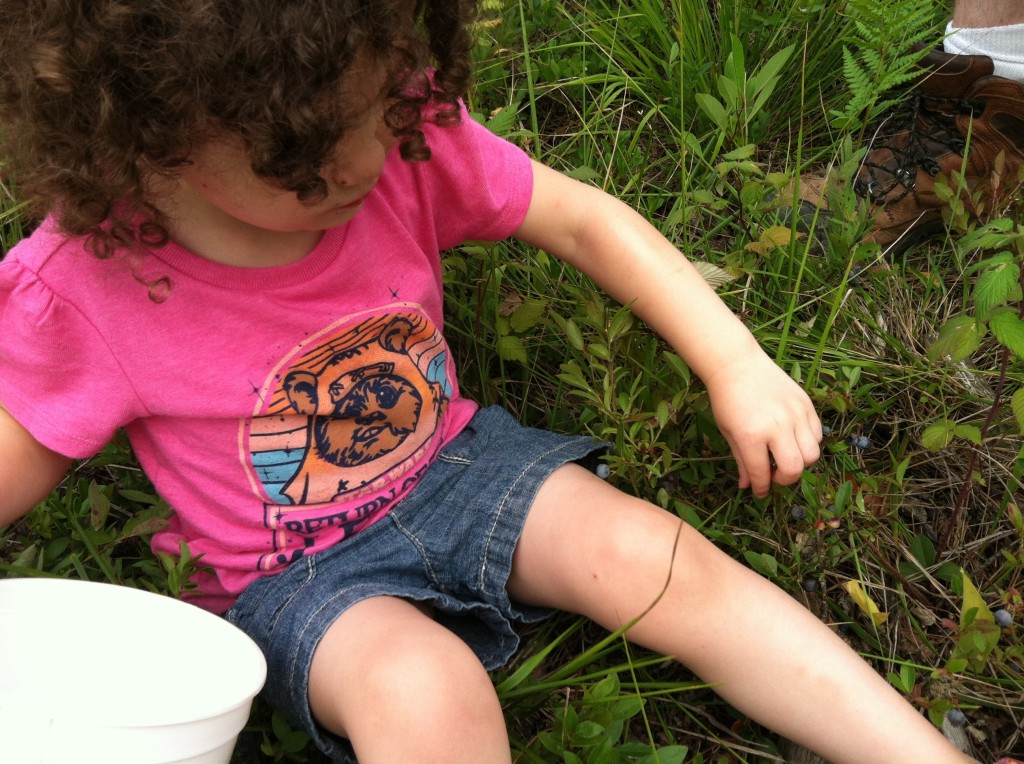 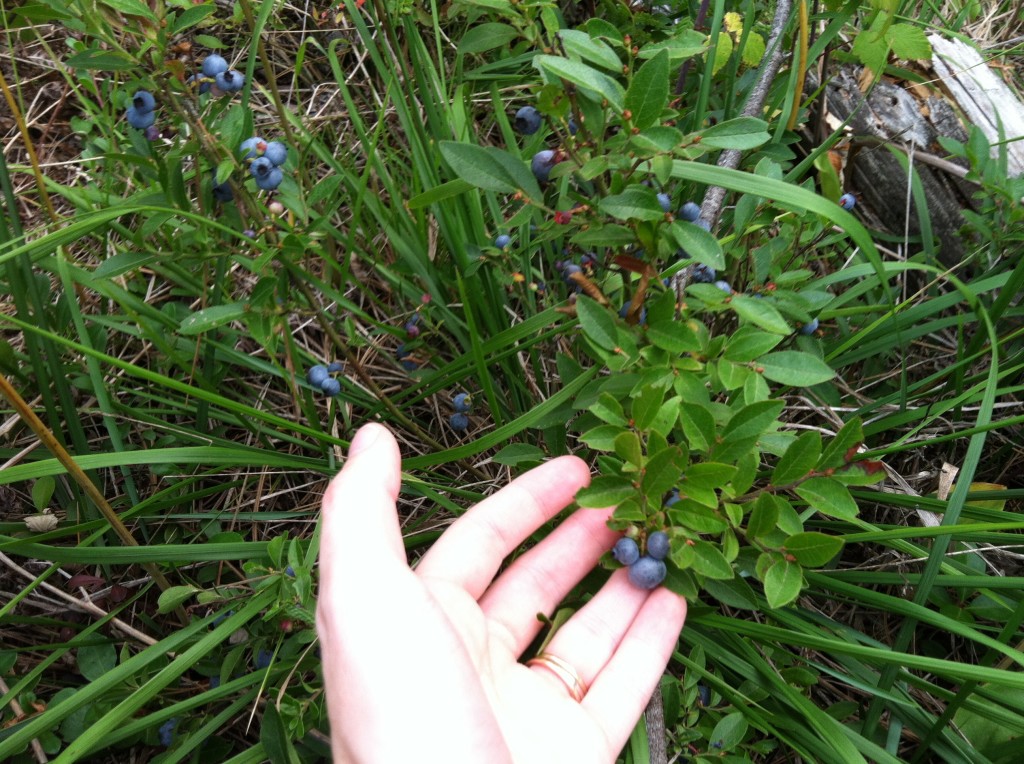 Many people told us there probably wouldn’t be many berries left, but in half an hour we picked quite a bit! The ground was covered with blueberry plants. It was a beautiful day for it too!

For fine motor skills we continued with the Kumon workbooks.

For literacy skills we continued working on the letters in her name, mostly tracing.

For math we continued on in her logic workbook, Beginning Thinking Skills. She is surprising me with how well she did on some things that I thought would be too hard!

I will post our book list as soon I can; for the 2 weeks we’ve been doing this camping theme we’ve had a lot of books! Also, stay tuned for Camping theme part 2. Part 2 will include fishing and hiking activities.